I have to admit, after the handful of earthquakes we experienced yesterday, all I could think of as I sat at my desk was, “Do it again!” I say that half-jokingly, for the human arrogance that I believe is at the root of these north Texas quakes is the sort of thing that makes me wonder whether Earth wouldn’t be better off without homo sapiens. Anyway, we did experience a couple more slight rumbles in the morning, but nothing on the scale of yesterday’s events. So there I sat doing my creative thang, one part of my brain anticipating the slightest sound or shake out of the norm. The life of the modern day designer -this one, at least – is an overly sedentary one, and it’s important to change things up physically and mentally throughout the day. Get out of the chair, walk down a couple doors to bullshit with a colleague, roam the warehouse, give your eyes something different to focus on and release the brain from the rut in which it finds itself, hoping that when it returns to the task it’ll choose a slightly different path which will take us both to the promised land.

During one particular break, I came across an article about the origin of the name of each NHL hockey team. Actually not a very interesting article as most were simply submitted and voted on by fans, with little to do with much of anything. When I came to the Toronto Maple Leafs, it mentioned a man named Conn Smythe, who purchased the Toronto St. Patricks in 1927 and changed the team’s name to Maple Leafs.  Almost every hockey fan has heard the name Conn Smythe, for the trophy which is awarded each year to the player judged most valuable to his team during the Stanley Cup Playoffs is named The Conn Smythe Trophy. The Dallas Stars’ own Joe Nieuwendyk won the trophy in 1999. But beyond that, who is Conn Smythe and why did they name a trophy after him? So, as stated in my intentions for 2015, I did some research on this question for which I had no answer. The Conn Smythe Trophy was introduced in 1964 by Maple Leaf Gardens, Ltd, which owns the Toronto Maple Leafs, to honor Smythe, the former owner, general manager, and coach of the Maple Leafs. Beyond that, nothing I learned was interesting enough to repeat.

So let’s just talk a sec about hockey itself. When you say the word ‘hockey,’ it should come out sounding like ‘khaki.’ That’s how the people up north pronounce it, and it’s their game. But this ice sport has caught fire down south. Who would ever have believed that ice hockey would survive, much less thrive, down hea where King Football rules? But the Dallas Stars have done just that, and delivered Lord Stanley’s Cup to the city in the process. I have become a die hard hockey fan, as have my kids, my wife, my sister. Actually, it was my sister Kelli who first piqued my interest in the sport, with her love for the New York Rangers. I love the speed and brutality of the game, and the grace, agility, awareness, deftness and toughness of the players. Hockey offers me the best value of any sport, providing far more action and excitement for the buck. Any time we travel out of town, if it happens to be anywhere near an NHL town, the first thing Stac and I do is check to see if the locals are playing. Last month we had the opportunity to catch two out of town games, one at The Garden and another in Philly. In the process, we created another hockey monsta, Toni Mesina. 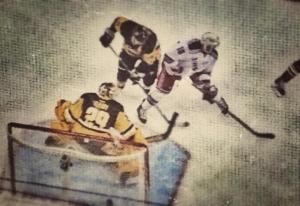 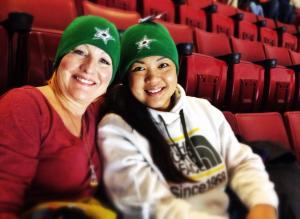 While Dallas sports venues are all upper echelon facilities – we thoroughly enjoy the Platinum section at American Airlines Center (when we can), where sightlines are excellent and servers deliver your mixed drinks to you in your seat – there is something really special about experiencing a game in a historic arena, even if ‘historic’ in a particular case simply means old and dilapidated. Even the term ‘barns,’ as these old arenas are known, evokes visions of a more raw game, horrible acoustics, poor lighting, uncomfortable seats, rabid fans and players without helmets, goalies without masks. Unfortunately, these old barns are being steadily replaced by slick new stadiums which can generate huge revenues with their swanky suites and Corporate naming rights. We were fortunate to be able to see the New York Islanders play last season at their old barn Nassau Veterans Memorial Coliseum, for next season the team will leave their home of 40+ years for the bright, shiny Barclays Center in Brooklyn.

Here’s a great article on hockey barns, and check out these old photos below . . . the charm of the barn. 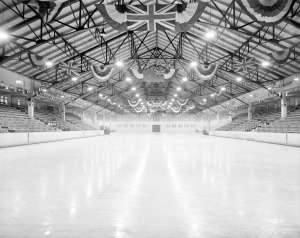 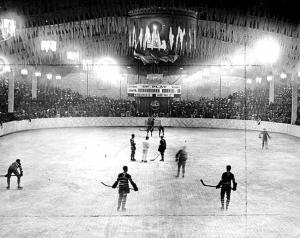