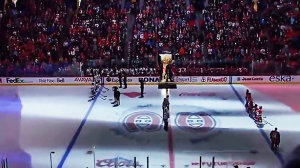 Before the start of Saturday’s game between the Canadiens and the Pens, the French Tricolour was projected onto the ice at Bell Centre in Montreal and the National Anthem of France La Marseillaise was played before O Canada and The Star-Spangled Banner to honor the victims of the week’s terrorist shootings in Paris. At the same time in Dallas, before launching into his own anthem Let Love Rule, an American who now lives in Paris spoke to us about the part that love must play.

When I hear the views of people from or residing in other countries and read news from ‘foreign’ sources, I am reminded just how limited and spun is the information we are fed in the United States. If I really want to hear news about which I can form my own opinion instead of a sales pitch or political platform, I need to seek it out, sometimes from beyond our shores, rather than allow it to be delivered to me. As Ted Koppel recently pointed out about Fox News, it is a business, not a news organization, an opinion I share and don’t limit to only Fox. The dangerous thing about news organizations as businesses is that their product is ideas and information, their reach global, their goal influence and control, ie: power. Information is power, as the saying rightly goes. Behold the damage inflicted on the world daily by the deliberate discharge of false, twisted and incomplete information.

In our United States, freest of all the world’s nations, ever, it still takes moral courage to voice an opinion which might be slammed as ‘UnAmerican’ by those holding different points of view and agenda. Which brings me back to the aforementioned American now living in Paris. “I believe in God,” Lenny Kravitz said. “You don’t have to, but I do.” Okay, so far. “We all know of the tragedy this week in Paris, where I live. You gotta love, and that means that I don’t love only the victims. I also love the people who did it, because they don’t understand. And how are people gonna change if we don’t love?”  Whoa . . . too far, right? I mean left. I mean you know what I mean. Love a terrorist? By God, America is at WAR with terrorism! Leave it to expats and foreigners to speak such unAmerican rubbish. Just like that Middle Easterner who said much the same thing, guy by the name of Jesus. UnAmerican, indeed. But have you ever heard anyone complain about someone else being unFrench (sacre bleu) or unBritish (blimey) or unCuban, even (ay ay ay)? No. ‘UnAmerican’ is a uniquely American creation, a smear meant to repress the free and honest expression of feelings, opinions and ideas through the use of fear or guilt. Now THAT is unAmerican.

Speak, Expess, Expound, and don’t forget to Love. To do otherwise is just plain UnMahelona.